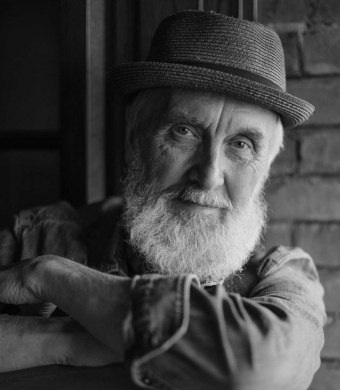 A gentle giant with kind eyes and an undeniable ability to make you feel good about yourself. Dubbed “Mr. Multi-Media” by Billboard Magazine, his diverse repertoire includes a prolific 12 Children’s Albums, countless energetically packed live shows for throngs of eager audiences across North America, composing the music for APTN.

YTV’s Tipi Tales, and writing the score and hosting the TV documentary The Simple Way (focused on the relevant, world-wide topic of voluntary simplicity). He has, without a doubt, established himself as a fundamental part of the North American family entertainment scene.  Whether it’s through CDs, videos, books or television, his cornerstone philosophy remains the same: absolute trust that his work can make a difference.

His pre-music experience working with troubled youth set the stage for what was to come; providing an understanding of the trauma of child abuse and the ability of music to heal. Those learnings, along with the untimely passing of his 12- year-old sister with Down’s Syndrome and subsequent passing of his father a year later, sparked a period of deep soul-searching and life-changing decisions. Inspired by his sister’s pure love of music, the man who had planned to become an economist, made a choice to become a performer. Lucky for us, he did.

More than the music, the two-time Juno winner (equivalent of a Grammy) for Best Children’s Album Sing with Fred and eight-time nominee’s body of work is about energy and emotional connection. The guy who crawled magically out of that hollow log for 12 seasons and nearly 900 episodes in the hit CBC TV show Fred Penner’s Place receives fan mail to this day from some of the 55 million American viewers where the show ran for four years on the U.S.’s Nickelodeon.

In 2000, the Canadian Institute of Child Health honoured Fred for his contribution to the well-being and safety of children. He is also a humble recipient of the Order of Canada, the highest recognition given to a Canadian citizen. One of his albums, Happy Feet was named Best Children’s Album of the Year by the U.S.A’s Entertainment Weekly and he is the first ever winner of the Prairie Music Award for Outstanding Children’s Recording.

Standing on an already firm footing in television and always excited about where the mystical journey will take him next, Fred is also making room for the possibility of another series or documentary.

A humanitarian always conscious of the “delicate balance required to create a positive influence that fosters healthy self-esteem in the life of a child”, his work is infused with a steadfast commitment to communicating with children and families in a clear, non-condescending way. “More than just fun”, this multi-talented artist has the wisdom and humility to know that the importance and the meaning of what he does can reach deeply into the lives of others.