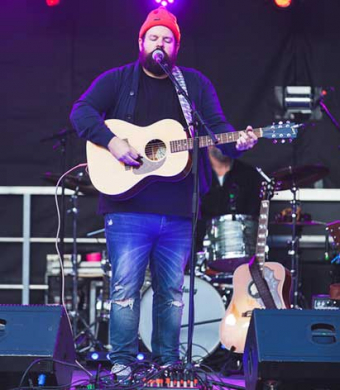 Donovan Woods’ new album is a study in contrasts, as one would expect from its name: Both Ways. That push-and-pull, especially in relationships, has long been Woods’ stock in trade.

As the lead track of Both Ways , “Good Lover” unfolds with acoustic instruments and Woods’ quietly compelling delivery –not what a listener might expect from the title alone. That masterful perspective has led to nominations for the Polaris Prize and the Juno Awards. In addition, his single “What Kind of Love Is That?” climbed to No. 1 on the CBC Top 20 Chart, while his catalog has accrued nearly 45 million streams.

Woods is also a notable Nashville writer with credits by Billy Currington, Charles Kelley, Tim McGraw and Charlie Worsham. NPR Music stated, “There are very few writers who can make you laugh and break your heart in the same song.” No Depression noted that Woods’ style is “as fresh and captivating as any out there.”

In Both Ways , Woods shows the rare ability to distill complicated situations and emotions into songs that are intriguing and relatable. Perhaps the collection’s most beautiful song is “I Ain’t Ever Loved No One,” a duet with Rose Cousins. The song captures that moment of bringing someone home to meet the family, using it as a backdrop to the anxieties of falling in love. True to the album title, a listener could either imagine a happily-ever-after ending or hear it as an ode to the one that got away. In most cases, Woods prefers to leave lyrics open to interpretation.

“The writing I always liked is about things that are indicative of a world but not the entire world. They lead you into the room and then let you fill in the details. One detail that makes you go, ‘OK, I feel like I understand.’ As long as you find that one detail, that’s the key. That’s the one you stick with and the rest is up to people’s imagination,” he says.

As Both Ways progresses, radio-friendly songs like “I Live a Little Lie” and “Easy Street” employ a full-band sound to flesh out the sonic landscape. A number of the songs are guitar-driven, yet they stop short of full-blown rock ‘n’ roll. With his typically droll sense of humour, Woods notes, “I know that nobody likes rock music anymore. I don’t even really like it anymore.” But he says the more aggressive moments on Both Ways are inspired by camaraderie in the studio and on tour, as well as the pop and R&B music he heard growing up in Sarnia, Ontario, where he could pick up the radio stations out of Detroit.

Both Ways concludes with “Next Year,” one of five songs on the album he co-wrote in Nashville, where he has a publishing deal with Warner/Chappell Music. The poignant narrative follows a boy through adolescence and adulthood, where hopes and dreams are in a race against time. While the lyrics are drawn from Woods’ own life, the experiences are universal.