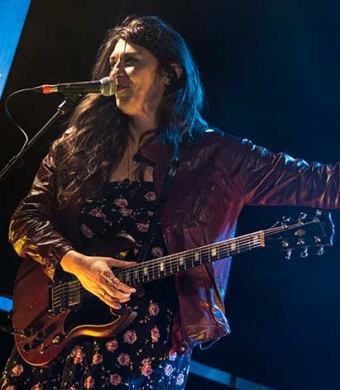 Whether you’re talking about her as a songwriter, guitarist or vocalist, one thing is indisputable: Hamilton’s Terra Lightfoot is a ferocious talent. Her songs tap into the raw emotion of hearts supercharged by love, lust, loneli- ness and temptation. Her playing melds expert finger-picking and distorted, hook-heavy melodies. And her elemental voice commands attention and awe, whether on slow-burning soul ballads or hard-charging rock numbers.

In writing and performing Every Time My Mind Runs Wild, Lightfoot set out to push her limits as a performer and challenge herself creatively. Where her debut was given to slower, softer songs and a subdued vibe, Lightfoot’s new album crackles with immediacy and demands attention. From the moment you put it on, the album announces Lightfoot’s arrival as a confident and natural lead performer.

Recording her sophomore album, Lightfoot says, made her a far more disciplined songwriter. That transformation took place early in the songwriting process. Holing up with headphones and a stack of vintage pop and rock albums, Lightfoot pulled apart songwriting mechanics, mastering tonic chords and middle eights and learning to craft memorably sticky choruses. She spent the weeks leading up to the recording sessions honing the album’s songs — working and reworking them until they were taut and lean. And then she hit the studio.

Lightfoot praises the supportive production team of Gus van Go and Werner F, who she says approached her material with a light and respectful touch. Tracks like “NFB,” “Emerald Eyes” and “Splinter” were recorded live off the floor over the course of a single day, a sprint made more urgent by the fact that the studio’s air condi- tioning was on the blink. Elsewhere, the pair took a more meditative approach, filling out tracks like “Moonlight,”  “No Hurry”,  “Never Will” and  “All Alone” with choice details. They also enlisted the talents of keyboardist Liam O’Neil (The Stills) to round out the core trio of Lightfoot (guitar, vocals), Matthew Fleming (bass) and Joel Haynes (drums).

From start to finish, the results are radiant and remarkable. Lightfoot’s touchstone influences — blues  legends Leadbelly and Lightnin’ Hopkins, soul greats Sam Cooke and Otis Redding, jazz titans Nina Simone and Billie Holiday — are fused with songs that evoke the burly soul and bounding rock of Them or Creedence Clearwater Revival.

For all those comparisons, however, one listen to Every Time My Mind Runs Wild will convince you that Lightfoot is an inspiration all her own.