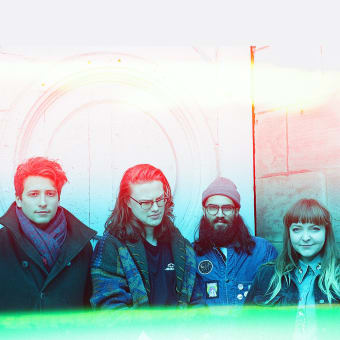 Check out Basement Revolver in St Catharines at Cicada Music Festival along with other amazing artists, food and drink.

Heavy Eyes (out August 24, 2018 via Sonic Unyon Records) is the debut album from Canadian dream pop trio Basement Revolver. There’s an air of weariness pervading the album, its title summing up a general exhaustion right down to the bone, as well as hinting at a heavier direction as they deftly merge fuzzed-out indie rock with poignant, yearning lyrics.

Bringing together the talents of Chrisy Hurn (vocals, guitar), Nimal Agalawatte (bass, synth) and Brandon Munro (drums), the Hamilton, Ontario-based band has been on a steady upward trajectory, capitalizing on the success of their debut single “Johnny” in 2016. The track garnered endorsements from DIY Magazine and Exclaim! as well as respected tastemakers Gold Flake Paint, who hailed it a “‘favourite song of the year” contender. They had stumbled across a sound that is capable of stripping listeners of inhibition, yet heavy hitting enough to leave a lasting impression.

The Agatha EP followed in 2017 followed, with its single “Bread & Wine” reaching the B-list on Radio BBC 6 Music and garnering support from John Kennedy at Radio X. The band has racked up over one million plays on Spotify across the two EPs.

To record their debut full-length, the band returned to local studio TAPE (Memoryhouse, Dirty Nil, Edgar Breau), where they had recorded their first EP. They had built up a solid relationship with producers Adam Bentley and Jordan Mitchell, as they continued to hone their signature sound. In this comfortable environment, they found the freedom to get heavier for some songs and more laid-back for others. As Hurn explains; “It also gave me the confidence as a writer to not take myself so seriously, to let myself get cheesy or goofy with some songs.”

And what great songs they are — assured yet open, beguiling yet honest, heartfelt yet playful. In a relatively short time, Basement Revolver has successfully encapsulated the yearning and hopefulness of their generation, whilst harnessing a unique, yet familiar soundscape.

Share this and let everyone know you want to see Basement Revolver at Cicada in St Catharines this October 2019.