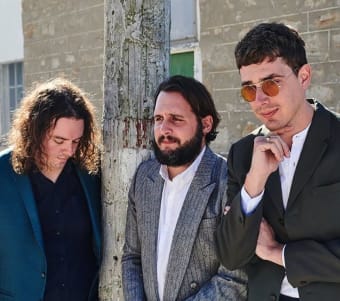 Check out Born Ruffians in St Catharines at Cicada Music Festival along with other amazing artists, food and drink.

Ten years ago, on the very first song on their very first album, Born Ruffians revealed their ambitions to start their own country. They didn't really offer details about how they would go about legally annexing land, drafting a constitution or establishing a native currency, but we did know this much: it had a population of three—singer/guitarist Luke Lalonde, bassist Mitch DeRosier and drummer Steve Hamelin. It would have a simple flag made up of the colors waved in the album's title, Red, Yellow & Blue. And as that album vividly illustrated, their country was a primitive place marked by jagged terrain, rickety footbridges and sudden tremors. Its roughly sketched borders were defended by makeshift fences made of tangled guitar strings, broken drumsticks and—when all else failed—ravenous hoots ‘n' hollers.

Over time, this lawless territory fortified itself into a stable nation-state. While some citizens left (Hamelin, back to school), its population ultimately increased by 33 per cent (thanks to replacement drummer Adam Hindle and second guitarist Andy Lloyd). The sparse scenery filled in with lush greenery. The rocky turf was gradually paved over with smooth surfaces. That untamed, in-the-wild vibe gave way to the steely efficiency of a big cosmopolitan city. State-of-the-union addresses—in the form of 2010's Say It, 2013's Birthmarks and 2015's RUFF— were broadcast to an ever-growing mass of enthusiasts around the world. Born Ruffians' makeshift country had become a pretty, prosperous place—thanks to regular alt-rock radio airplay, millions of Spotify listens and non-stop international touring—but it was one that Lalonde no longer recognized. Without his fellow founding father Hamelin by his side, it just didn't feel like home anymore.

Share this and let everyone know you want to see Born Ruffians at Cicada in St Catharines this October 2019.