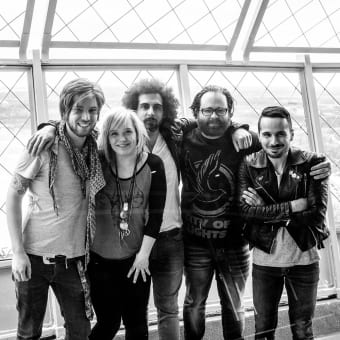 Check out The Mandevilles in St Catharines at Cicada Music Festival along with other amazing artists, food and drink.

There was a moment during the recording of Don’t Ask, the most stirring and evocative track on The Mandevilles’ new album Windows and Stones that came to epitomize the heart, soul and energy of the band.

The vocal performance by band co-founder Serena Pryne was so gut-wrenching and so emotionally draining, mining the very depths of her soul that she practically collapsed into the arms of superstar producer GGGarth Richardson when it was over. That vocal take and the similarly powerhouse performances from her bandmates, came to be the template and benchmark for the rest of the album.

“I knew it was a powerful song with a lot of emotion behind it and I was a little intimidated to record it” said Pryne. “He let me do my thing and just pour everything I had into the microphone. He said I would know when I was done.”

From that moment on, that song set the tone for the rest of the record.

“I don’t know if GGGarth knew it ahead of time and planned it with that song, because he would always reference Don’t Ask if we were struggling at any other moment. He set the entire tone based on that track,” said guitarist and band co-founder Nick Lesyk.

The entirety of Windows and Stones is just as creatively, spiritually and emotionally intense and takes the listener on an aural and experiential journey that they won’t soon forget.

Find The Mandevilles On

Share this and let everyone know you want to see The Mandevilles at Cicada in St Catharines this October 2019.