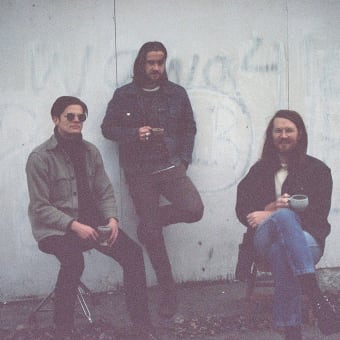 Check out The Wooden Sky in St Catharines at Cicada Music Festival along with other amazing artists, food and drink.

The title of The Wooden Sky’s fifth full-length album is an abridged quote from Frank Herbert’s 1965 sci-fi novel, Dune: “Survival is the ability to swim in strange water.” It’s a phrase that seems especially apt in 2017, as many of us are still reeling from the previous year. For Gavin Gardiner, the frontman of the Toronto-based indie rock band, the way to understand and reconcile these unknowns — from oil pipelines and refugee crises to his own family’s personal history— is through songwriting. “It’s how I filter a lot of things that come in,” says Gardiner, as he walks through the residential streets of Toronto’s Roncesvalles neighbourhood. “For better or for worse, it’s how I deal with things and how I communicate my feelings.” Swimming in Strange Waters is Gardiner trying to make sense of the world.

The band (made up of Gardiner, multi-instrumentalists Simon Walker and Andrew Wyatt, violinist Edwin Huizinga and drummer Andrew Kekewich) started writing and recording demos in a small farmhouse in rural Quebec in January 2015, but then put them aside as they embarked on a year-long tour in support of their previous album, Let’s Be Ready. When they resumed work on the album in March 2016, Gardiner says the band caught a severe case of “demoitis”, a condition wherein “you fall in love with the scrappiness of the demos.” So rather than completely re-working them, they decided to record the album in the same way as the demos: in Gardiner’s home studio, using old tape machines and live off the floor.

The resulting album is a sonic maelstrom that sees the band exploring unchartered waters, where textural psychedelia inspired by the Paisley Underground movement melds into quiet, acoustic cyclical guitar melodies, before once again transforming into a bombastic, Johnny Cash-esque rally against the XL Keystone pipeline in Canada. While Let’s Be Ready found the Wooden Sky writing a pure “rock and roll” album, Swimming in Strange Waters sees the band experimenting once again. “I feel like we’re back on track,” says Gardiner.

Find The Wooden Sky On

Share this and let everyone know you want to see The Wooden Sky at Cicada in St Catharines this October 2019.

The lineup has been announced! Stay tuned to our website and social media pages for the schedule and announcements.